There are no events to display

At the students’ initiative, Rochambeau offers students the opportunity to create and manage their own associations, with the support of the Vie Scolaire staff.

A Rochambeau’s club is made up of students, from middle and/or high school, and an adult referent, a Rochambeau staff member. Each club carries a project, validated by Mrs. Katuala, and carries it out throughout the life of the club. The number of students invested in each club varies and depends on its needs.

This program has existed for several years in Rochambeau and lists various clubs. Interested and motivated students have the opportunity to participate in an existing club; to take over a club (which was left vacant because the students from last year were unable to organize campaigns to take over the existing club); or to propose a new club project.

Creating a club or becoming an active member is a great way to socialize, get involved in a new hobby, better understand a field of study, explore new cultures and have a positive impact on the community!

How do I join an existing Rochambeau association?

The easiest way to join is to attend one of their meetings. The groups are meeting virtually this year until they go back to school in person.

How to create an association at Rochambeau?

Why get involved in an association?

1- First of all, associations serve to unite students around a cause that is close to their hearts. This allows motivated students to build a project, to meet other students who share the same interests, to unite a group to raise awareness among others and to promote socialization within Rochambeau.

2- Secondly, clubs provide a new perspective on an activity or a cause, which is still unknown. If you are in a humanitarian aid club, for example, you will be able to see the world from a different perspective, taking into account the things you will discover and adapt the message you want to convey, in order to raise awareness among your comrades.

3- Then, clubs make it possible to surpass ourselves through the involvement that they require. To achieve and attain the goals, you will need to develop skills such as adaptability, determination and teamwork. Developing your “soft skills” is extremely useful for your studies and your professional life.

4- Finally, it gives you the opportunity to have an exceptional experience while being beneficial for your applications in higher education. Whatever the country, universities are more and more fond of extra-curricular experiences. They are what will differentiate you from other candidates. Also note that in the United States, some universities expect a minimum number of hours of involvement in an activity called "SSL" (Student Service Learning). So get started!

You will have the opportunity to do what you love and share this feeling with others :-)

Joining an association helps students find out what they’re good at: multitasking, being organized, generating ideas, helping others, etc.  Gaining self-awareness is a considerable asset in higher education or in a future career.

Knowing how to work within a team is essential whatever future career is envisaged.  Students not only have to promote their suggestions and ideas within the group but also learn how to accept advice or criticism from others.

Gaining necessary “people skills” to foster meaningful interaction with others. Students learn the best way to communicate both with individuals and groups while gaining emotional intelligence and learning how to work towards a common goal.

Leadership skills are invaluable throughout life and build self-confidence.  Being a leader within an organization involves working with a team, problem-solving, planning events and interacting with faculty, staff and alumni.

Organizations and extra-cultural community activities look great on a résumé! University admissions and future employers notice when a student has participated in, or has run a student organization. They see such students as hard working and able to handle multiple responsibilities.

Joining a club allows students to meet people and make new friends while giving back to the school or community.

As the holiday season approaches, many Rochambeau students are mobilizing to help those in need in the community.

Ramzi Sanai has been selected as a national winner of the Audubon Naturalist Society's Cicada Haiku Contest.

Thank you for this UNICEF fundraising

Join one of the student association!

The Youth Passion Project is a high school student-led program who offers a variety of courses to elementary and middle school students. 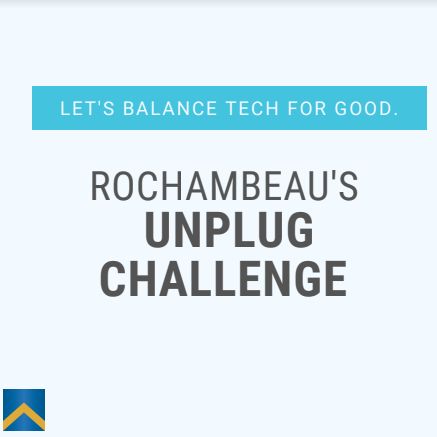